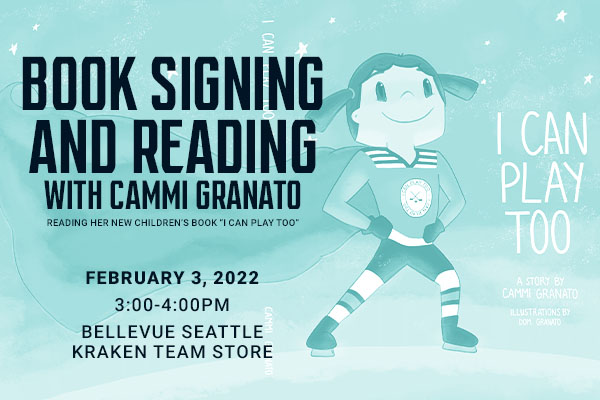 In celebration of National Girls and Women in Sports Day, we're excited for the launch of Seattle Kraken scout Cammi Granato's children's book 'I Can Play Too'.

Based on a true story, 'I Can Play Too' tells the journey of Mimi who desperately wants to play hockey like her older brothers! However, it wasn't something that girls did in her town, ever! Instead, Mimi's Mom puts her in figure skating with her older sister, but still Mimi is more interested in joining the hockey players on the other rink. Will Mimi follow her dreams and become a hockey player?

Mimi is a trailblazer whose narrative inspires and teaches girls that they can and should follow their dreams however unconventional they may be, supports the movement of empowering girls and female athletes.

Cammi will be reading and signing books on February 3, 2022 at the Bellevue Square Seattle Kraken Team Store from 3-4pm.